A few years earlier a fatal car crash took the lives of Leah’s beloved husband and their two babies, leaving her disabled. Life looked bleak. She was approaching forty, unemployed, broke and desperate.

Then she met Mason. He was charming, charismatic, persuasive, and a successful businessman, well respected in the community. His teenage daughter did nothing to welcome Leah into the family, but life is never perfect.

Then, two years into her second marriage, Leah Brand’s world is turned upside down; inanimate objects in the house move, her clothes are left out for the rubbish collection, pieces of furniture change places, there are unexplained noises and hauntings.

As the disturbances increase, everyone accuses Leah of losing her mind. Soon she begins to doubt herself and she starts to spiral down into a world of insanity. Is she going mad, or is someone out to destroy her? And if so, why?

A gripping, psychological thriller for fans of Mary Higgins Clarke and Louise Jensen. 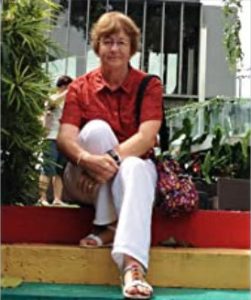 Lucinda E Clarke [not her real name] was born in Dublin, but has lived in 8 other countries to date. She wanted to write but was railroaded into teaching. She had a habit of “falling” into other careers, announcing on radio, then scriptwriting for radio and television. She has been a professional writer since 1984 winning over 20 awards for her work. She has written on most topics, including mayoral speeches, company profiles, drama documentaries, educational programmes for radio and television, adverts, news inserts, court videos, National Geographic, cookery programmes, to name but a few!

She lectured in scriptwriting, had her own column in various publications, and written for national magazines. She was commissioned for two educational books by Heinemann and Macmillan, and book reports for UNESCO and UNICEF.

She graduated into running her own video production company in South Africa.

“Walking Over Eggshells” is her first self-published book, an autobiography which describes her adventurous life, trying to escape the emotional abuse she suffered from early childhood.

She published her second book a novel, “Amie an African Adventure” in July 2014, already a #1 bestseller in genre on Amazon.co.uk.

Lucinda’s third book ‘Truth, Lies and Propaganda’, was published on Amazon on November 30th 2014. It is the first in a series of two books and ‘More Truth, Lies and Propaganda’ was published in 2015. They follow the author’s journey from the classroom to radio announcing, on to television and finally to setting up her own video production company. The books are packed with anecdotes of the often hilarious things that happened while out shooting a wide variety of subjects, taking the reader behind the scenes in the media and highlighting South Africa and its people.

The second book in the Amie series Amie and the Child of Africa was released in October 2015.

Changing genre, Lucinda next published Unhappily Ever After, a satirical look at Fairyland two hundreds years after that fateful ball only Cinderella has had enough and is plotting to divorce King Charming.

The third book about Amie, Stolen Future came out at the end of 2016 and book four in the series came out in the summer of 2017.

After losing her much loved husband, her two small children, and her leg in an horrendous car accident, Leah Brand faces much rehabilitation. She gradually claws her life back into some semblance of normality – until a stranger runs his shopping trolley into her in the supermarket. He insists on taking her for a coffee by way of an apology.

Thereafter he pursues her relentlessly until she agrees to marry him. As a well healed lawyer, he doesn’t appear to be short of money but, as the weeks and months go by, Leah’s husband is absent more than he’s present, and she learns that money doesn’t buy happiness. A surly and difficult teenage stepdaughter makes Leah’s life more difficult. Many peculiar, unexplained events, within her new home, convince Leah that she is going mad. Once started, this beautifully written, plausible, psychological thriller is hard to put down and I read well into the small wee hours on several occasions, eager to discover the source of Leah’s troubles. The book ends with an unusual twist, which makes me wonder if there is going to be a sequel.