Everybody loves roses and, since the floral emblem for June is the rose, what better time to investigate the origins of the flower? Easy-peasy, I thought.  Wrong…  Information I came up with boggled my mind. I knew the genus Rosa was an old cultivar, but I didn’t realise garden cultivation began in China 5,000 years ago. Not only that, the discovery of certain fossils suggest that the rose could go back as far as 35 million years. That kind of put paid to my grand idea of writing about the entire history of the rose, unless of course, I’m prepared to explore the subject over at least six more blogs, which I’m not. If I did that, I visualise my lovely followers falling away like rose leaves from their stalks in winter.

What to do? Narrow the information down…

Folk who are regular readers of my blogs will already know about my medieval trilogy, featuring Oric and his mentor, Ichtheus, the apothecary. Apprenticed to the old man, Oric eagerly learns everything he can about the usage of herbs and flowers for curing illnesses. They carried their medicaments in panniers on the back of donkey, Braccus, to a weekly market held in the village of Kilterton. Occasionally, when space allowed, they took rosewater, which they made for lady customers to use as perfume, or for flavouring food. That journey, to and from market rarely went without incident, often because of the donkey’s antics, falling foul of various criminals along the way, not to mention the ongoing, hilarious repartee between Oric and Ichtheus. Please look out for a short passage, describing a sinister encounter the pair experienced on one of those market days, which I have added to the end of this blog.

As we already know, roses are woody perennials, which grow as erect shrubs, standard or miniature, climbing or trailing over arches and trellises. Most are armed with sharp, hooked thorns, which help the plant to cling onto whatever it is growing on. Deer and other non-carnivorous species are known to enjoy eating roses and, over the years, a few species of the plant have adapted by growing straight, closely packed prickles along their stems. This method of self-preservation prevents grazing animals from doing too much damage to the mother plant. Nature’s adaptations never cease to amaze me.

Many roses have heady perfumes. Flowers vary in size and have colours ranging from white through cream, yellow, pink, and red. Some bear clusters of 5 petals others have many more, forming the familiar, tightly packed, whorl of colour. My favourites are wild roses which twine alongside sweet-smelling honeysuckle, along hedgerows that line many of north Yorkshire’s country lanes. These flowers bloom throughout summer and the constant hum of bees fills the air, as they buzz from one pale pink bloom to the next. These busy little creatures create pollination, which, later in the year, causes bright-red hips to form.

In England, during the late nineteen-forties and early fifties, some foods were still rationed, and enterprising folk gathered whatever they could find to supplement their somewhat sparse diets. I well remember tagging along with my grandparents, armed with baskets, scissors, and walking sticks used for dragging down fruits that grew too tall for us to reach. Returning home with baskets full of bright red hips, I compared their colour to my poor skinny, lacerated little arms.

Hips contain vitamin C and, when grandma was able to buy sugar, she made bottles of rosehip syrup and jars of jam. One, taken by the spoonful, purportedly protected us from winter colds, the other, spread on hot buttered toast, was a regular Saturday afternoon treat for as long as stocks lasted.

Toast, back then, did not pop of out an automatic machine on the kitchen bench, but was made by impaling thick slices of bread on a long-handled fork, held over an open fire on the hearth in our living room. Many a scorched set of fingers did I suffer, but the discomfort was soon forgotten when I sank my teeth into hot toast spread with butter and rose hip jam. Looking back, the tradition reminded me of the much larger fireplace, known as an inglenook, in the Bayersby Manor kitchens where Oric and Ichtheus lived in the fourteenth century. I spared a thought for the young boys whose job it was to hand-turn whole pigs and other chunks of meat impaled on a spit, over a much larger fire. Their skin was perpetually mottled from close contact with the fiercely hot logs.

Tea can be made from rose hips, though I have never tried it. Candied rose petals are traditionally used as cake decorations and confectionary and are readily available from numerous producers. Other uses include the making of perfume from oil, obtained by steaming and distilling crushed petals. Grandma kept ‘Attar of Roses’ in a fancy glass bottle on her dressing table, which she dabbed behind her ears and on her wrists before foraying out on social occasions. Over two thousand flowers are needed to produce one gram of oil; no wonder Grandma used it so sparingly.

The Romans saw roses as the height of luxury, and they scattered them knee deep on special occasions. At one of Nero’s banquets, high ranking guests were showered with so many petals one or two people suffocated. Maybe they suffered undiagnosed asthma.  Rosewater fountains were popular, though some early ascetic Christians abhorred the use of flowers, especially roses and lilies. However, in the fullness of time, the rose symbol led to the creation of the rosary and featured in Christian prayers.

Roses reached the height of popularity, in England, during the twelfth and thirteenth centuries and have continued to be loved by people down the ages. Portraits, illustrations, and stamps regularly include roses and they are often used as decoration on architecture.

Impressionists Paul Cézanne, Pierre-Auguste, and Claude Monet featured roses in their paintings. A few years ago, I visited Monet’s garden at Giverny in France and was enchanted by the variety of roses, which continue to grow in flower beds surrounding his house. 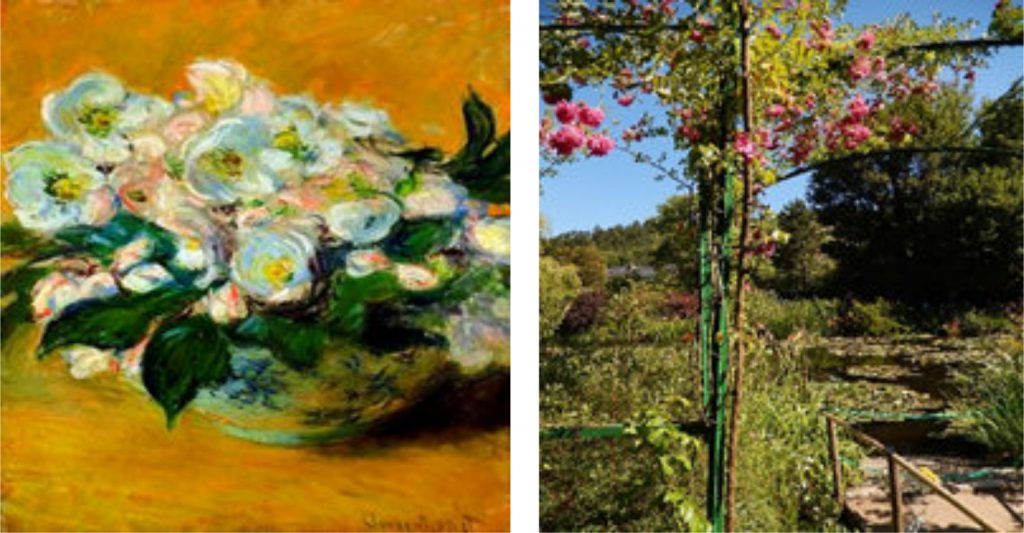 Down the annals of time we continue to grow roses, paint pictures of them, embroider them on table and altar cloths, wedding veils, and evening gowns. Roses in bridal bouquets remain top favorites, and churches are often decorated with them, the perfume exquisite

Last but not least, what would we do on Valentine’s day, Mother’s Day, weddings, funerals, and many other notable dates without roses. They are a symbol of love and long may they continue to bloom and grow.

Excerpt from Oric and the Alchemists Key

Next to moneylender Figg’s table, an old crone shoved a lumpish man onto a wooden block. The fellow mouthed a few obscenities at the woman and clanged a handbell. “Come all you sick serfs and villeins. Try our pink potion for pale people,” he shouted.

The old crone fetched her son a vicious clout to the back of his legs with a stick. “You great oaf,” she shrieked. “I could do better than that wi’ me tongue cut out. Shout a bit louder for gawd’s sake; else we will be here all day.”

“Charlatans,” Ichtheus muttered, “I dread to think what their ghastly mixture contains.” He pulled harder on a rotten molar anchored in the lower jaw of his friend Uther Tidwall, the bootmaker. Uther, upon whose chest Ichtheus was kneeling, let out a yell as the offending tooth plopped free. Oric ducked to avoid a spurt of crimson blood and dabbed at the patient with a rag. Ichtheus apologised to Uther, angry that he had allowed himself to be distracted.

A malodorous stench, similar to a fish stall at the end of a hot day, insinuated itself into Ichtheus’ nostrils. He raised his head and glowered at Oric. “What is that fearful stink? Check your feet, boy, to see that you have not stepped in something obnoxious.”

The source of the smell sidled into Ichtheus’ peripheral vision. It was the old hag from the opposing stall across the road. Unhurriedly she picked up, examined, sniffed and prodded every item that Ichtheus had for sale. Oric was about to tell her to be off, but the pressure of Ichtheus’ hand upon his boot reminded him to mind his manners.

“Hey, Uther! Who is that unsavoury woman?” Ichtheus whispered. “Have you seen her before?”