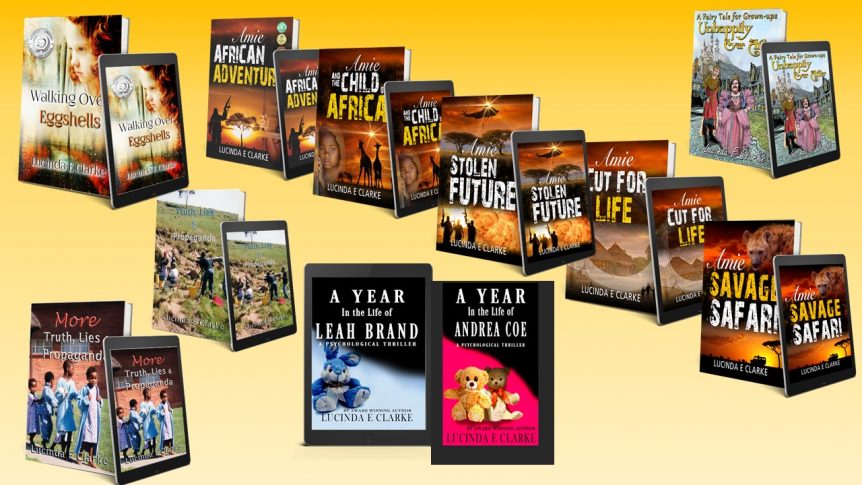 I had the good fortune of reading and reviewing A Year in the Life of Leah Brand – A psychological thriller by Lucinda and I am thrilled to have her here. 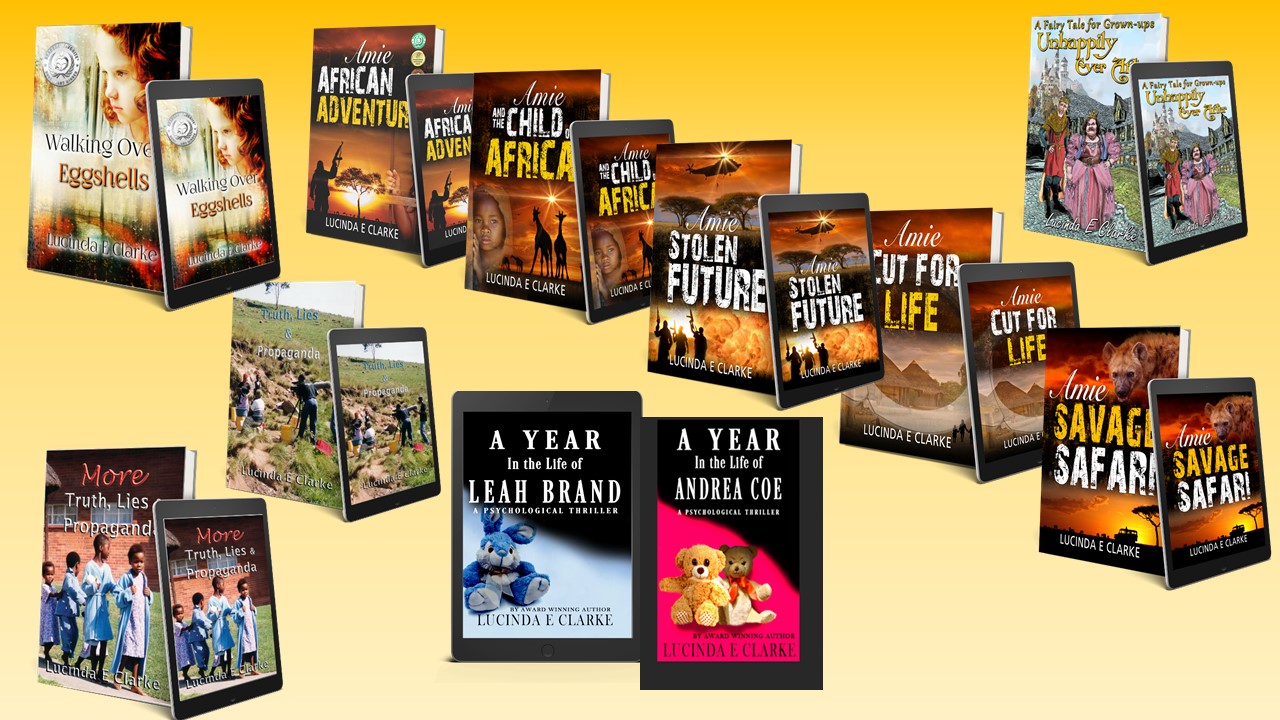 Thank you for having me Lesley.

Is Lucinda E Clarke interesting? Probably not. I was mentally abused as a child by my narcissistic mother – thousands of children are. I married a Walter Mitty clone who was totally unreliable – lots of marriages fail. He abandoned me in the African bush with a 9-week-old baby, but that can’t be unique can it? I have lived in eight different countries – travel is all the rage nowadays but I did get thrown out of Libya, that does not happen to everyone. I watched a public hanging, quite common in historical terms, had a bayonet at my throat while broadcasting live, well perhaps that’s a little different. There was that tear gas attack and the elephant charge, and the breakdown in the game park and the live bomb found in the Sahara, and the Ex being imprisoned, twice, but I survived to tell the tale. Walking over Eggshells  myBook.to/WoE

I ran The very Worst Riding School in the World  (free myBook.to/WRS) with a ‘How to’ book stuffed down the front of my jodhpurs.

I longed to be a writer but fell into it when I was fired from my teaching job – no reason given. First attempt at writing a radio play, rescued from the bin and covered in spaghetti, won me the Playwright of the Year Award in South Africa. Then I went a little crazy with stories, plays and magazine articles, before being picked up by the South African Broadcasting Corporation as a freelance scriptwriter. I had realized my childhood dream in my late thirties.

Approached by the Big 5 I refused a contract, unable to wait for royalties when the broadcasters paid in thirty days and I needed to feed the children.

My radio work led to television, then documentaries, conference videos, corporate work, dramas, mayoral speechwriter, to be brutally honest, I wrote for anyone who was prepared to pay me. I became an expert at propaganda, and a spin doctor for clients, some of them from hell, while meeting impossible deadlines.

Fifteen years on and I had my own video production company, traveling all over South Africa, still feeding the family I’d produced. I made legal history in South Africa handling my own divorce when I had no idea where my husband was, yes, that’s a little different.

I was lucky enough to meet Prince Charles, interview Nelson Mandela and numerous other world leaders. I filmed banquets and world conferences, climbed rubbish dumps in squatter informal settlements and made a series on urine diversion toilets. ‘Life in the media is not all glamour’ I explained to my students at Durban University where I lectured on a part time basis.

From millionaire in Libya – a his and her yacht, (how kitsch can you get?) – to scratching around for bread money, life for me has not been boring. Until I hit retirement. Now that was boring, so why not write books? To date there are three memoirs, a Fairyland comedy, a five book adventure series set in Africa with a couple of back stories and two psychological thrillers. I have also contributed short stories in six books written for charity.

I now lurk in a rabbit hutch in Spain, pretending to be retired while happily scribbling and hating the marketing, about which I has no clue whatsoever. For some reason quite beyond me, I won shedloads of awards for my films, scriptwriting and my books. My last remaining ambition is to hit the NYT list.

I am independently published by choice, considering it faster, with more control, better royalties and the major publishers don’t do all that much marketing for new authors, even if they have written professionally for over 40 years. I have not sent out one letter to an agent or publisher and turned one small publisher down early on. I write because I am driven to write and suffers withdrawal symptoms when I am away from my laptop.

My biggest fear is there is still so much to do and I am not sure I have the time left to fit it all in. Through it all my sense of humour has kept me sane – my definition though, friends and family have their doubts.

Link to all 5 Amie adventure books as a product
www.amazon.co.uk/gp/product/B07PWG7R6G

Unhappily Ever After a comedy
myBook.to/UeAfter

A Year in the Life of Leah Brand – psychological thriller
mybook.to/LeahBrand

A Year in the Life of Andrea Coe
Release May 2020.

Wow what an amazing life you have led, thank you so much for sharing this with us and I look forward to seeing more of your book in the near future.