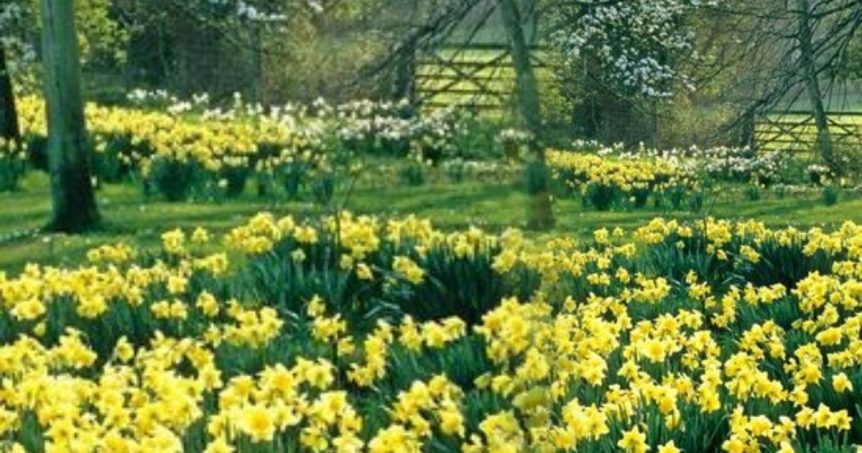 April comes from a Greek word meaning ‘opening’, which is appropriate when one thinks of the flowers and trees that burst into life after lying dormant throughout the cold, dark winter months in the northern hemisphere. Meanwhile, at the southern end of the globe, autumn has arrived with some longed-for cooler weather.

As an ex-pat Yorkshire woman, I recall the glorious valley of Farndale, situated in the centre of the North York Moors where displays of golden daffodils grew in profusion throughout woodlands and meadows, along a seven-mile stretch of the River Dove.

It’s said that medieval monks from Rievaulx Abbey were the first people to plant daffodil bulbs in the area, and I’d like to believe the flowers we see growing here today are descendants of the holy brothers’ ancient cultivars. What a thrill to think that Oric, the young man from my medieval adventure trilogy, might have wandered amongst those flowers with his friends. However, the ones that now carpet the countryside are the small wild variety, Narcissus pseudo narcissus.

In my youth, I cycled from my home for an hour to see the daffodils each spring. Fifty years ago, the valley was filled with birdsong and the sound of water chattering along in the brook. I revelled in the cold, crisp loneliness of hill and dale, and the intoxicating perfume of spring on the breeze. Today, that solitude is replaced by the thousands of visitors who crowd the area for a four-week period during March and April. Once able to walk at will amongst the daffodils, they are now protected inside the Farndale Nature Reserve. 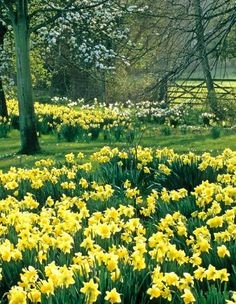 Farndale was an area much loved by my mother-in-law, Pat Wilson and the following poem, written in 1967, is taken from her little book, “Not Having a Title”.

Easter Monday, Farndale Yorkshire.
We went by train to Battersby
(The train arrived at half past nine)
We ate Easter eggs, drank thermos tea
Then climbed the old incline
Stopping at Blakey Topping
To munch our lunch.
Then scrambled down to the Dale below
(no made road, forty years ago!)
Enchanted valley, lonely, cold
Stinging wind, and fairy gold
Our yearly pilgrimage stoutly done
We trudged the Tops, to Castleton.

To-day the cars go nose to tail
Protesting gears grind down the Dale
Where an A.A. Scout on duty
Shows the way to sign-boarded beauty,
A loud-speaker van the silence fills
“You must not pick the daffodils!”
And ushers, like the cinema show
Tell us the way we have to go.
Oh, Easter dream of long ago
Oh, lonely stream… Oh, empty moor. 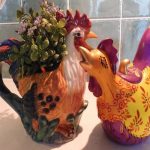 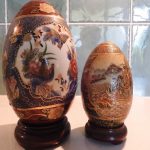 Not only do I love daffodils, I also have a fondness for chickens and eggs. More than likely a follow-on from my childhood, when I helped Pop with his hens. There is nothing more soothing than the sound of a cackling chicken, and gathering warm, new-laid eggs, from beneath the feathery undercarriage of a nesting bird. It is a childhood memory I cherish. I will also never forget the rude awakening, courtesy of the rooster’s noisy call at 4am every morning.

Yup, it’s that time of year again, and I snapped the above picture in my local supermarket during the first few days of March.  As usual, the Easter bunny is hopping around extra early for fear of missing out on the sale of one single egg.  I guess needs must, since Australians spend almost two million dollars on Easter eggs every year. I hardly dare imagine how many tonnes of chocolate that equates to.

Australian manufacturers tried promoting chocolate bilbies in place of rabbits. Bilby populations are dwindling so, hopefully, bringing the animal to peoples’ attention may help to preserve bilbies in the wild. Not to mention, bringing an Australian slant to Easter. This year, I haven’t seen any of the cute creatures lurking about in chocolate form; perhaps I’m not looking hard enough. 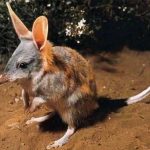 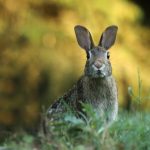 The bilby (pictured left) looks a little rabbit-like and digs deep burrows in which to raise their young.

Surveying an array of Easter bunnies and chocolate eggs in the supermarket, I wondered what the connection might be. Chicken lay eggs, so why do we tell our children that the Easter Bunny delivers chocolate eggs on Easter Sunday?

Oiginally featured in pagan rituals, eggs were symbols of renewal and fertility, celebrating the change in seasons, as winter gave way to spring.  In the Christian calendar, forty days of Lent precede Easter, during which time people give up favourite foods. At the end of this period of restraint, namely Easter Sunday, eggs were given to celebrate the resurrection of Jesus Christ and a new beginning.

In medieval times people fasted diligently, cutting out eggs especially. Of course, chickens continued to lay, and their eggs were boiled in order to preserve them. On Easter Sunday, children, often dressed in new clothes, which also suggested new beginnings, took fresh eggs to church to be blessed.

As a youngster, I received new clothes to wear each Easter Sunday, though I wonder if my parents were aware of how far back the custom dated or, indeed, the significance of it. I have no knowledge of the same thing occurring with children in the twenty-first century.

Chocolate was non-existent in medieval times but eggs, decorated in various ways, were exchanged across all strata of society to celebrate the resurrection of Christ. Mid thirteenth century, it is said that the Countess of Leicester gave up to four-thousand eggs to her tenants.  Kings presented eggs, covered in gold leaf, to their friends and favourite servants. Eggs were also painted red to denote the blood of Christ.

In the nineteen-fifties, my grandmother boiled eggs with onion skins, which gave the shell an attractive, marbled-yellow and brown effect. My cousins and I were driven into the Yorkshire Dales on Easter Sunday, for a picnic, and to roll grandma’s eggs down a hillside. Whichever egg arrived at the bottom of the hill intact, scored a chocolate prize for the owner. Egg rolling dates to medieval times but the reason behind the custom is unknown, other than for the fun of it. Across the annals of history, it seems children will always be children.

For medieval folk, Easter Sunday saw not only the return of eggs, meat and honey-based mead, Simnel Cake was also a great favourite. Initially baked by monks, it was more bread than cake.  Made with yeast and best quality white flour, filled with dried fruit, spices, and almonds it made a welcome, if solid, rib-sticking change from the straightened diet folk had endured for the forty days of Lent. 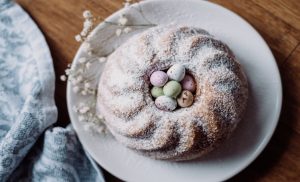 Every Easter, until her death, my grandmother baked a Simnel Cake for me, though her twentieth-century ingredients were perhaps lighter and more delicate than the ones used in the medieval version. She decorated the cake with eleven marzipan eggs. At the time, I had no idea of the significance of this custom. It wasn’t until much later in my life, I learned each egg represented one of the apostles, who shared the Last Supper with Jesus. But there are twelve apostles, so what happened to the twelfth egg? It was never added because of the iniquitous part Judas played in the death of Christ.

Now I’m a grandmother, I may have a go at baking a Simnel Cake for my family, though I might pass on the marzipan and cheat with mini chocolate eggs and a couple of bunnies. 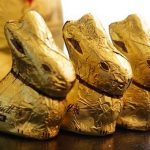 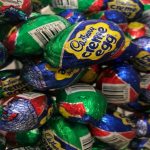 Wishing everyone a safe and happy Easter 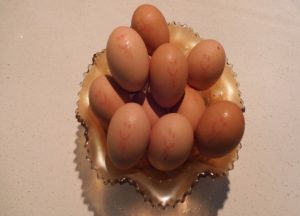 I am running a Rafflecopter Giveaway which I hope that you will enter.