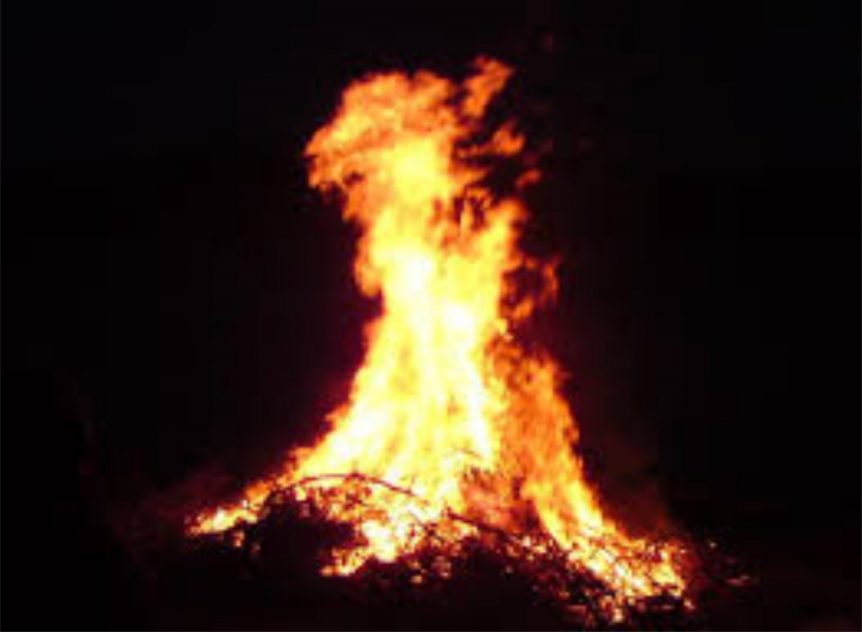 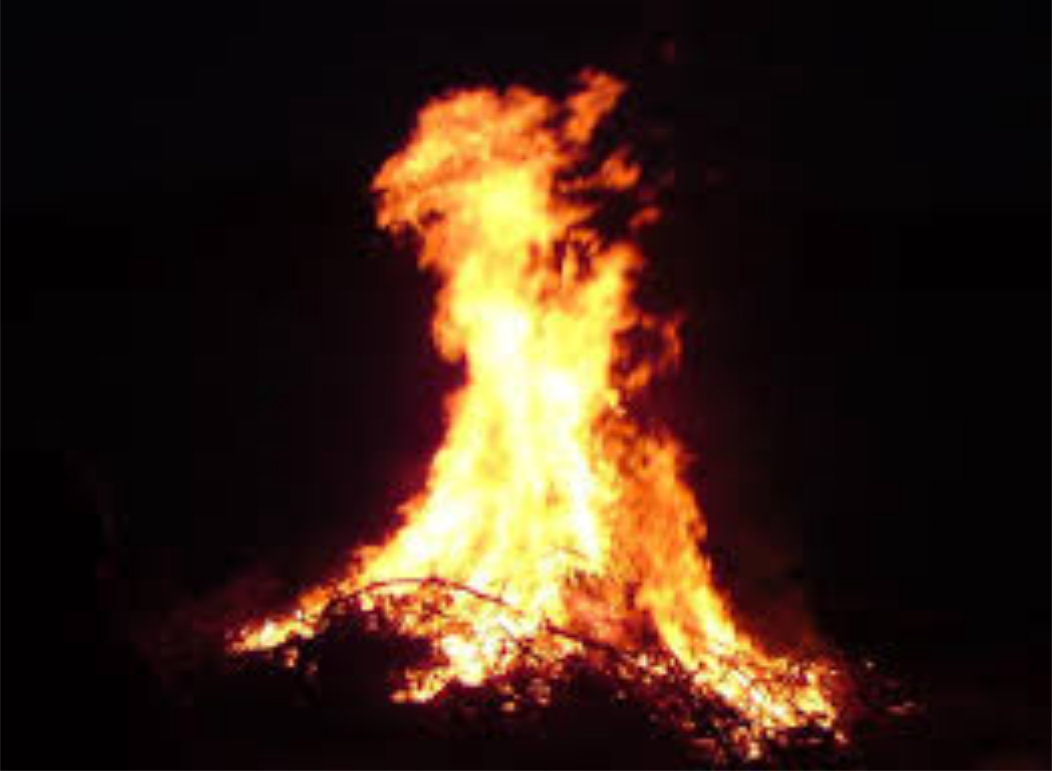 The historic festival of Beltane took place on the first day of May. Gaelic in origin, it marked the beginning of summer and, to celebrate the occasion, houses were decorated with flowers cut from Hawthorne trees. To protect people, animals and cops from evil spirits, or fairies, believed to be especially active at this time of year, eccentric rituals were performed. Druids lit bonfires and drove cattle through the smoke to protect the beasts from harm. People followed, often leaping through flames and over hot embers. Folk extinguished their home fires and, to bring good fortune for the rest of the year, relit them, using smouldering branches from the bonfires. Maidens arose at dawn to roll in the early morning dew, convinced it would enhance their sexual allure, keep them young, and sooth irritating skin conditions. People visited Holy Wells, believing the first water drawn on Beltane morn was especially potent. They walked around the wells, praying for good health, often leaving coins. I wonder who benefited most, the coin distributors, or the coin collectors – whoever they might be. Feasting followed these rituals, and food and drink was offered to appease both natural and supernatural spirits. Though Beltane celebrations have largely ceased in modern times, some Celtic neopagans and Wiccans continue to treat the occasion as a religious holiday.

‘Ne’er cast a clout, ‘til May is out,’ my wise old Granny used to say. Many an excursion on a sunny May morning, clad in thin t-shirt and shorts – despite Granny’s good advice to wear something warm ended, later in the day, with chattering teeth and skin a paler shade of blue.

Balmy days, filled with sunshine, often arrive with the onset of the May; however, the month can end with frost and sometimes a fine covering of snow.

But where did Granny’s saying first come from, and how far back into the annals of time does it go? Does it refer to the month of May or the Hawthorne tree, common name May, which blossoms in profusion throughout the British Isles during May.

Dr. Thomas Fuller first posed the question in 1732 but came up with insufficient evidence to pass judgement as to which was the correct theory. The saying might have something to do with an old English superstition to not wear new clothes until the last day of May is out and could have been used long before the beginning of the 18th century.

May was a busy month for people in Medieval times, especially women and children. As well as all the other daily chores, it was their task to stop birds from eating seeds, which had been scattered across the fields for summer crops. The countryside reverberated with shouts, and sticks banged on pots, from dawn ‘til dusk.

Sheep were washed ready for shearing and, after the event, fleeces were rinsed several more times. A light greasing with butter or lard helped to separate the fibres ready for teasing with thistle or teasel heads.

Spinning wheels appeared in the thirteenth century, and ladies of the house spent their days spinning waxy-textured fleece into strands of wool on to spindles, ready for weaving into cloth. The picture below shows a modern spinning wheel, but the medieval version didn’t look much different. Lady Myferny, who features in my medieval adventure trilogy, spent time, along with her friends and ladies in waiting, using a distaff and spindle, which was another, time-consuming, method of spinning wool.

At the end of a long, cold winter, May brings forth a multitude of glorious flowers. Bluebells carpet forest floors, spreading a haze of blue as far as the eye can see. Treetops host a multitude of birds, in full song, to greet each new dawn, and bees go about the business of pollinating flowers, in orchards and gardens. Nothing is more heart-warming, on a misty summer’s morning, than the sound of droning insects and the distant call of a cuckoo.

Sayings pertaining to this month…

‘Those who bathe in May, will soon be laid in clay.’

‘If you wash a blanket in May, you will wash one of the family away.’

On a happier note:

‘A swarm of bees in May is worth a load of hay.’ 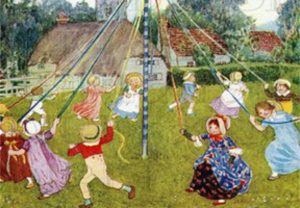 Of course, I couldn’t possibly write a blog for May without mentioning the Maypole

Maypole dancing was originally practiced by Germanic pagans, and may have begun as early as the Iron Age. First ‘officially’ recorded in the mid-14th century for England, Wales and Scotland, the custom was practiced as a Christian celebration to welcome the beginning of summer.

Protestants, during the 16th century, disapproved, believing Maypoles to be idolatrous, immoral, and Heathenish portrayals of vanity. Under this regime, they were perceived as Pagan idols and torn down. 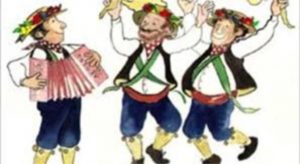 During the early 17th century, attitudes changed. Maypoles were once again erected on village greens across the land. Trees, required for the purpose, were occasionally stolen from private estates, infuriating the owners. In some cases, villagers stole poles from each other, which incited violence. Nevertheless, on the first day of May, country folk decorated their poles with garlands of flowers and gathered together to feast, drink, and  dance.

By the 19th century the Maypole had become a symbol for ‘Merry England.’ Ends of ribbons, attached to the top, were held by men and women who danced around the pole, weaving a fancy pattern until all the ribbons met at the bottom. The custom continues to this day and participants are often joined by Morris dancers, but I will save that topic for another blog.

Noteable dates for May…

15th May 1930 Amy Johnson was the first woman to fly solo from the UK to Australia
6th May 1840  The Penny Black was the first stamp to be issued in the UK
6th May 1954 Roger Bannister ran the 4minute mile
9th May 1671 Cpt Blood attempeted to steal the crown jewels
10th May 1994 Nelson Mandella became President of South Africa
12th May 1820 Florence Nightingale was born
18th May 1991 Helen Sharman was the first woman in space
21st May 1946 Bread rationing began in the UK
28th May 1908  Ian Flemming was born
29th May 1953 Sir Edmund Hillary and Tensing Norgay climbed Everst.
30th May 1431 Joan of Ark burned at the stake.
3oth May 542 King Arthuir died.

Excerpt taken from Book one, Oric and the Alchemists Key.

Apothecary Ichtheus, accompanied by his apprentice, Oric, is travelling from his home at Bayersby Manor to the village of Kilterton, where he plans to sell  medicinal products and homegrown herbs at the weekly market.

To get to market in good time, Ichtheus arose before dawn. He donned a bonnet with long earflaps and a dark-green cloak. His leggings, made from tough canvas, were cross-laced with leather garters and a pair of ankle-high boots encased his narrow feet. Climbing on to the donkey, Ichtheus settled himself into the saddle and tucked his legs in front of two panniers full of medicaments. “Giddy-up Braccus,” he said, gently kicking the donkey into motion. Oric, wearing his second-hand boots, followed his master on foot.

Ichtheus set a brisk pace along an old Roman road and Bayersby Manor was soon lost in the pre-dawn gloom. The sun crept up over the horizon, burnishing acres of windswept moors with golden light. Feeling euphoric, Oric filled his lungs with fresh, country air.

“You must never treat these moors lightly,” Ichtheus warned. “I maintain a great respect for this part of Yorkshire, especially in winter when the earth is blanketed with snow. “Men have lost their way and died in the frozen wilderness.” He stretched his arms wide, “But on glorious summer days like this, the place soothes my soul.”

Sweet flowery perfume filled the air and a skylark warbled, adding its tuneful melody to the sound of bleating sheep and droning bees. Oric watched the little bird spiral upwards until it became a tiny, black dot in the pale blue morning sky.

Glancing back to make sure Oric had not fallen behind, Ichtheus caught sight of Sir Edred’s wolfhound skulking along amongst some tall ferns. “Ye gods, what is yon mutt playing at? Send him home at once, Oric. The last thing we need is to look out for him all day.”

The dog collapsed in a heap on the muddy track, wagging his tail half-heartedly. He adored Oric, and he intended to follow his new friend come what may.

“You certainly have him well-trained, Master Ichtheus,” Oric tittered. “One word from you and he does exactly as he pleases.”

Ichtheus wriggled in his saddle and glowered. “Mind your manners, boy, or I shall send you home … along with the dog!”

Belly to the ground, Parzifal inched forward. Crescents of white beneath the brown of his eyes gave him a comically doleful expression.

“Look at him,” Oric chortled. “Crafty dog moves only when he thinks we are not watching.”

“Aye, well, we are watching, and he cannot come.” Ichtheus remained adamant.

“What if I throw a few rocks at him? I could do with a bit of target practice,” teased Oric.”

“You will do no such thing!” Ichtheus snapped. “If anything, untoward happens to that wolfhound, Sir Edred will likely chop us up for dog meat.”

Oric paled at the idea. “Perhaps we should let Parzifal come with us. That way I can keep an eye on him.”

Dreading the thought of turning back, Ichtheus agreed. “Very well, but for goodness sake call the dog to heal.”

Oric whistled, and Parzifal bounded forward. He shook his leonine head, and splattered Ichtheus with globules of drool.

“Wipe that silly grin off your face, boy,” growled Ichtheus, mopping saliva from his leggings. “Else I shall fetch you a clout.”

Oric’s smile widened, for knew his master’s words to be an empty threat.

Thank you so much for reading my blog. I hope it was both enjoyable and informative.  To keep up with my news and any giveaways I am running, please sign up to my newsletter.

I would also like to thank everyone who voted for me in the TCK Readers Choice Awards. I continue to run in third place, which is wonderful, but I sure would like to get up there into first. If you haven’t already voted, I’d be thrilled if you could spare a moment to vote for me. You can find Oric and the Lockton Castle Mystery on page 14 in the historical section. www.tckpublishing.com/2020-readers-choice-voting-page