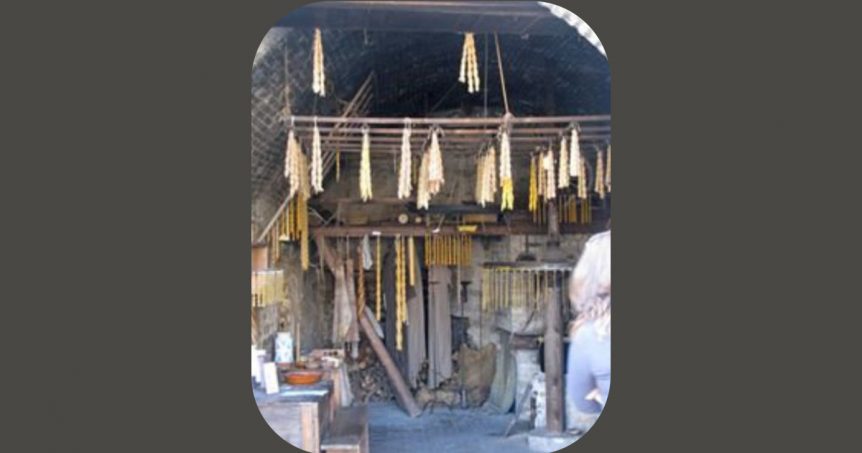 Happy New Year to you all.

A mighty thunderstorm in our N. Queensland hometown, caused a two-hour power outage on Christmas night. Before the lights went out, we caught The Queen’s Speech on TV, but we missed the family tradition of watching The Royal Variety Show.

Undaunted by the loss of power, we unearthed candles, candle holders, and matches, which provided us with light – of sorts.  My family suggested we find a board game, and out came the Scrabble. Playing by candlelight… What fun.

Squinting at the small, letter-tiles in the dim light, my mind drifted back to the privations folk in late thirteenth and early fourteenth centuries endured.  Whilst writing my medieval adventure trilogy, I did a fair amount of background research into lighting and heating, not to mention many other topics of the era. It made fascinating reading, and I thought that comparing those early times with the twenty-first century would make an interesting blog.

Seabirds, being fatty creatures, were popular suppliers of light for islanders living off the coast of Scotland in days gone by. Hapless birds were captured and killed, a mossy wick thrust down their throats and set alight. I mention this method of lighting for interest sake only, because this form of illumination does not appear in any of my books. No doubt the smell was gut-churning, and the indifferent light short-lived. Nevertheless, I take my hat off to the ingenuity of those people, though I pity the birds’ ignominious demise.

More conventional forms of lighting, in the middle ages, consisted of candles made from wax or tallow, plus torches, lanterns and lamps.  Candles were expensive and only the upper classes could afford them. Tallow candles, made from animal fat, were the cheapest to manufacture. A plaited rush wick was dipped into melted fat and allowed to cool after each emersion. This procedure was repeated until the desired size was accomplished. These candles were impaled on spiked candleholders called prickets. Alternately a cup-shaped holder was used. 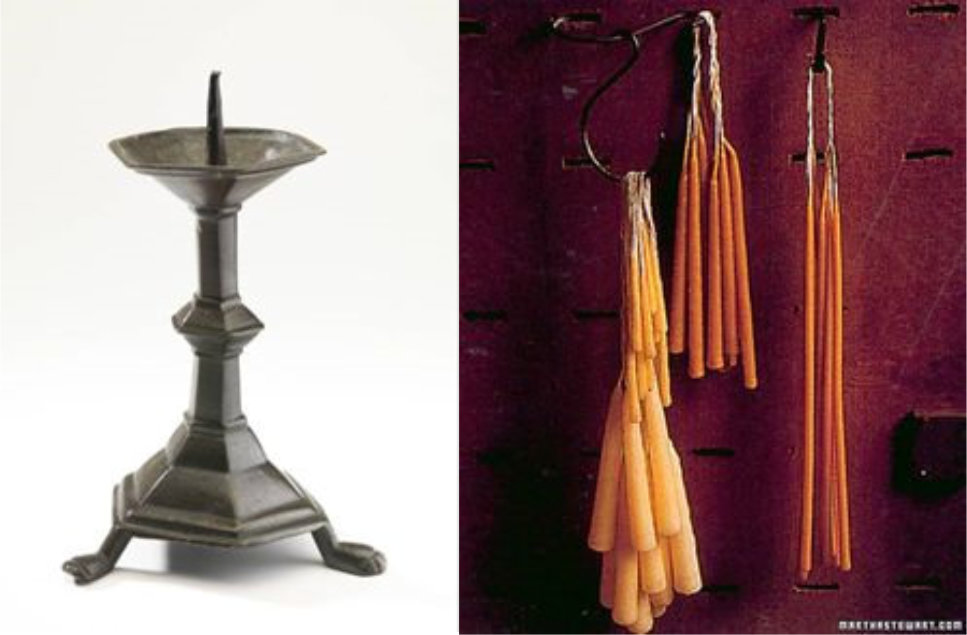 When set alight, tallow candles produced copious quantities of rancid smoke. Not a pleasant environment in which to be. Candles made from beeswax were much cleaner but, in the early days, they were rarely used in any building other than a church.

Separate guilds were established for the two different types of candle making: Tallowchandlers and Waxchandlers. Any member of the latter guild caught mixing cheaper tallow with the wax, risked having his entire stock of wax and candles confiscated by the authorities.

Esica Figg, arch villain in my books, was employed as an apprentice in his father’s candle- making business. White scar tissue on his hands and arms remained a constant reminder of the hot wax burns he suffered; not one of them worth the indifferent financial reward he received for the job. When his father died, Esica sold the business and used the money to begin the more lucrative occupation of moneylending. But that is another story for another time. 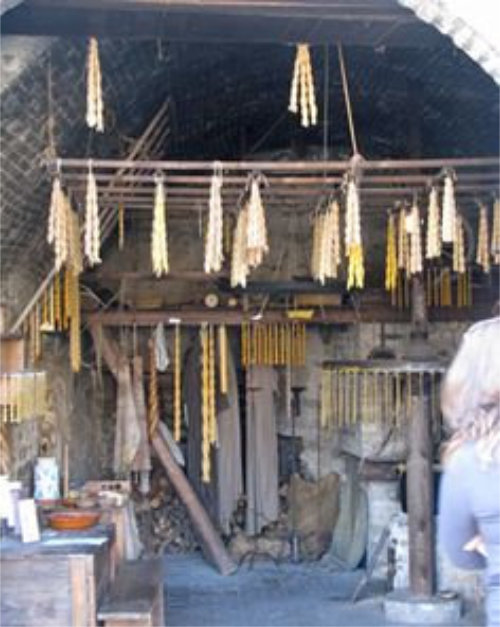 The common man’s most popular form of lighting, during the early middle ages in England, was rush light. This was formed by using cut rushes, soaked and stripped, then dried and dipped in fat. Once the fat set, the rush was clamped in an upright position, and usually burned for around one hour.

Lamps were by far and away the most popular source of light, and there were many different types. Apothecary Ichtheus, another character featured in my Oric trilogy, favoured a ceramic lamp with an open reservoir of fat, in which he sank a floating wick.  It was one such lamp that caused Esica Figg an enormous problem whilst exploring an underground tunnel.

Finally, how did people in the middle ages set light to their various devices?

A sharp-edged piece of flint, or other hard stone, was used to strike a spark against a piece of steel. The stone had to be kept sharp and when blunt, needed to be replaced. Grazed knuckles were common, and much swearing regularly accompanied the procedure.

An experienced tinderbox user would have a fire going within a few minutes; however, if kindling, such as dry moss or twigs, became the least bit damp, it could take considerably longer to achieve success. Another form of kindling was singed rag, known as charcloth.

Once the fire was lit, it was up to one of the younger members of the family to keep it going twenty-four hours a day, all year round, regardless of how hot the summer weather became. The flames were tamped down at night to save fuel, then resurrected in the morning ready to heat broth, or cook gruel for breakfast.  Heaven help any youngster who did not pay proper attention to the job, thus allowing the fire to fade out. Tapers were thrust into the flames and used to light lamps and candles at the onset of dusk.

In conclusion; I won’t be quite so quick to grumble next time my twenty-first century lights go out for a couple of hours.