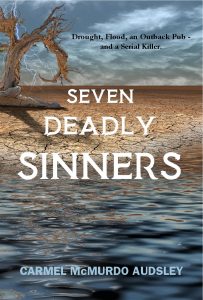 My latest release novella Seven Deadly Sinners is set entirely in Australia in 1957, with an eclectic band of travellers who find themselves trapped in an outback pub with a serial killer.  It was a treat for me to go back to the fifties, to a time without mobile phones, computers or the internet, and to give readers that sense of isolation being miles from anywhere. It is set after a long drought and, as any Aussie will tell you, after a long drought, eventually the rains come and flood the parched earth.  This is a slight departure from some of my other novels, as they are mostly set in Scotland.

I have spent over forty years as a Journalist, Editor, Publicist, Publisher and Marketing Manager and, while I thrived on the pressure of meeting deadlines, I needed a break and so ‘retired’ about ten years ago.  Retired is becoming such an out-dated word.  I would always tell people I was ‘redirected’ – redirecting my time to the things I would like to do, one of which was tracing my family history in Scotland.  The stories of my ancestors were so fascinating, and I knew the loves and losses they experienced would resonate with other people, so I decided to write my first novel Ours, Yours and Mines which is set in the mining villages of Ayrshire Scotland.  My great-grandmother gave birth to eight children and buried seven of them at various stages of their lives.  It was heartbreaking and readers loved it. 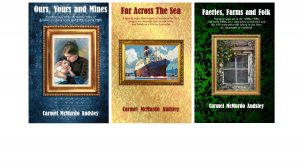 I followed up with a sequel Far Across The Sea which documents my father’s life in Scotland and his emigration to Australia in 1950.  By this time, I had gone further back in my research to the early 1700s and so I wrote the prequel Faeries, Farms and Folk to complete the trilogy.  I have received some wonderful emails from readers, but one sums up the feelings expressed by many: ‘I felt I had my nose pressed up against the window of that tiny cottage full of love, as I watched Mary care for her family.  I worried with her as her husband and sons went off to the mines each day, and cried with her as her children succumbed to tuberculosis.  What a strong woman she was.’

My fourth book was a complete work of fiction, but as it was set in 1859 in Edinburgh, I had to research the period.  I love the research side of writing a book.  The Undertaker is a murder mystery with a strong female protagonist.  After Kate’s father dies, she takes over his undertaking business, which was unusual at a time when all that was expected of a woman was to marry well and support her husband.  Kate was determined and feisty and knew her own mind.  As she lovingly tends to her first client and examines her body, she suspects that the woman has been murdered.  She becomes reacquainted with a little spirit friend from her childhood, and sets out to catch a killer.  I had written The Undertaker as a stand-alone book, but readers asked for a sequel so I wrote The Undertaker:Masquerade to allow Kate to keep following murderers and further her own education.  She is desperate to become a doctor, but women were not allowed to study at the prestigious Edinburgh University.  She hears about a woman who disguised herself as a man to be allowed to study, and she tracks her down.  Kate thinks she knows her secret – but does she?  The final book in The Undertaker series is The Undertaker:Hallowed Halls, where Kate and characters based on the real-life Edinburgh Seven, take on the university to be allowed to study. 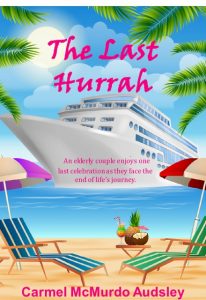 In between writing this trilogy, I had an idea for a novella about the neglect of elderly parents by their adult children.  In The Last Hurrah, Anna and Bob (who is Scottish, in keeping with the thread I had created for other books) are both diagnosed with terminal illnesses.  When they try to contact their adult children, they find it hard to penetrate their busy lives.  They don’t want to become a burden on them, so they decide to take one last cruise and not come back.  This book has had a big impact on readers who perhaps may have experienced the busyness of their children’s lives, and the loneliness that often comes with older age.  It’s a two boxes of tissues read.

After our last trip to Scotland in 2010, I decided to start a magazine for the ex-pat Scottish community in Australia.  It had been a couple of years since I’d produced a magazine, and I got the itch.  Newspapers and magazines had been my life for so long and, even though I needed a break, it was what I loved to do.  I started Scots News Magazine to let people know about Scottish news and events and it quickly gained a following.  A reader sent me some research he had done on his great-great-uncle who had travelled from Scotland in 1885, worked on sugar plantations in Maryborough and Mackay in Queensland, and then met an untimely death.  I decided to run an edited version of the story in the magazine, but I really wanted to turn it into a novel.  After consultation with the person who had sent me the notes, I took the bones he gave me and added flesh and blood through my own research.  Murder In The Bush is therefore based on a true story, set in Scotland and Australia.

That brings me back to my latest novel Seven Deadly Sinners which is book number nine.

When I wrote the first book, I sent query letters and samples to three publishers.  I received two positive responses, but the most they would offer me was eleven per cent royalties.  I’d worked in the publishing industry long enough to know that I would be doing most of the marketing myself and so negotiated a higher royalty with a publisher in America.  This worked out well, but as my books become more well-known I started thinking about taking more control of the publishing process.  As it happened, the publisher I had chosen was bought out a year ago by a bigger company and the service went downhill, so now I oversee every aspect of my books.

A lot of people ask me how to write a book.  If they are asking about creativity, the only answer I can give is that they need a solid idea expressed well.  A lot of people are great storytellers, but not great writers.  That’s good news, as we will always need people who can tell new stories, but they need the help of professional writers, editors and publishers to get a book reader-ready.  It’s your name on the book, and your reputation and brand you are building.  Anything less than producing a quality product would be a disservice to the writer and to her readers.

Amazon Page for all Books
www.amazon.com