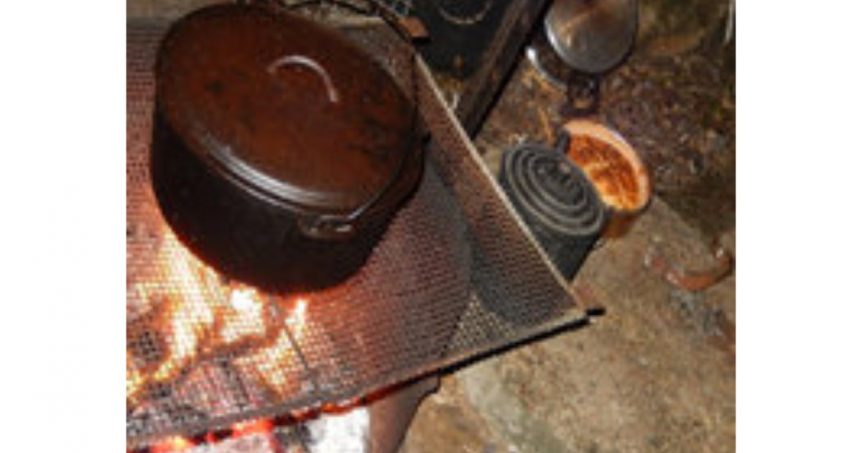 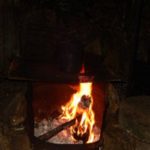 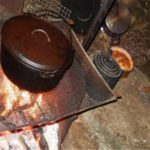 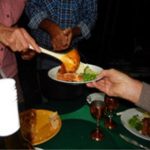 A cast iron pot sits over the open fire with whisps of steam escaping from beneath the lid. Beside it is another smaller pot containing damper, a form of yeastless bread Australians love to bake on these occasions. The smell of beef stew mingles with the heady pefume of night jasmine, and I think how lucky I am to be sitting outdoors, on this balmy night, waiting to share a delicious supper with my friends.  This we do for fun. Not so the Yorkshire folk I write about in my medieval adventure trilogy. For them, cooking over an open fire was a neseccity.  Whatever the season, come rain, hail, or shine, they were obliged to cope with primative facilities every day of their lives – or go without hot food.  As an ex-pat Yorkshire-woman, I can relate to the inclement weather they endured.

Many poor peasants lived in the open, making do with tree branches covered in bracken for shelter. They prepared their meals outdoors, and used whatever kindling they could beg, borrow, or steal to fuel their fires. Those fortunate enough to afford a roof over their heads, lived in dingy, single-roomed cottages. In winter, they shared their cramped quarters with their livestock. The animals’ bodyheat helped to keep the family warm, but the smell must have taken some getting used to.

A waste-not, want-not society, folk utilised every comodity they could lay hands on, including dry cow dung, mixed with straw, to burn alongside the precious commodity of wood. I wonder what they would have thought of Aussies, burning cow pats to repel mosquitoes. 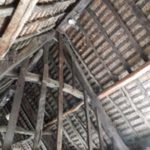 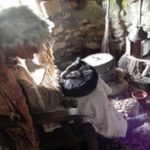 Cottagers indoor fires were kept alight on a central hearth twenty-four hours a day, tamped down at nigh to save fuel. As well as providing cooking facilities, the fire also supplied heating and lighting for the family. Windows were virtually none existent amongst the peasant classes; the only airflow, apart from a specially constructed smoke hole in the roof, was the doorway. In cold, wet weather, people were reluctant to open their doors to the elements and  endured smelly, unhealthy conditions for several months of the year. Sparks from the fire drifted into the thatched roof, sometimes setting it alight. To save their homes, folk bucketed water from a nearby stream, or well, to douse the flames. 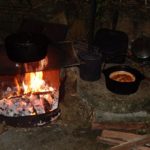 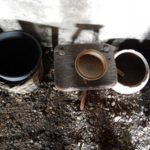 Medieval housewives favoured three-legged, cast iron cauldrons for cooking. The heavy vessels were thrust directly into the fire or hung from an adjustable hook attached to an overhead beam. Since the women had no means of regulating the heat, they needed to keep a wary eye on the pot, to make sure food within didn’t boil dry and burn. Bones were boiled for stock and pottage, consisting of vegetables, pulses, herbs and whatever meat they could come by, provided them with a nourishing stew. As winter approached food became scarce and the pottage was watered down until it became virtually tasteless. Earthenware containers were pushed in amongst the hot ashes around the perimeter of the fire and eggs, regarded as a delicacy, were baked in their shells or cracked directly on to the hot hearth. I suspect a fair amount of soot was consumed along with the eggs.

Goodwives cooked and cleaned, cared for the animals and children, and tended the garden where vegetables were grown for the table. Once a week most women attended the local market, where they sold or bartered produce. In spring, after ploughing was finished, the women sewed oats, barley, and wheat on their masters’ land. Once the crops were harvested, they were allowed to glean what grain was left on the ground.  They then paid a miller, at the lord of the manor’s insistence, to have it ground into flour. Draining financially for the peasants, but a nice little earner for their lord and master. Once the housewife turned her flour into dough, she dropped it into an iron pot, covered it with a lid, and baked it in the fire. Only licenced bakers and wealthy households were allowed ovens, for they consumed tremendous amounts of precious firewood.

Husbands, who were lucky enough to have gainful employment, worked all the daylight hours, tending their masters’ land. Tools were primitive, and horses pulled ploughs fitted with wooden tynes It was back breaking work. 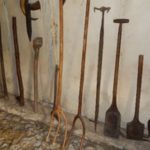 At the end of the year, before winter set in, cattle were sent for slaughter and salted down to provide food through the cold months of the year. Hunting venison and wild boar was the prerogative of the landowner and, once the animal, whatever it may be, was butchered, the unwanted offal was distributed to the peasants. Pies, bulked out with carrots, turnips, and onions made the offal go further. Snared rabbits and pigeons added extra meat to their diets.

The landed gentry lived in a medieval version of luxury and employed servants to shoulder the work. They entertained guests in the Great Hall and, to save everyone from unpleasant cooking odours, plus the risk of setting the roof on fire, the kitchen was often located in a separate building a short distance away from the main house. A covered walkway kept inclement weather from ruining the food in transit.

Transporting food from place to place reminded me of my school days in the 1950s. At noon each day, an elderly gentleman towed a Bain Marie behind his bicycle from the kitchens in the junior school, where meals were cooked, to the small senior school a couple of blocks away. Eight aluminium boxes, submerged in hot water, contained lunch for the high school pupils and their teachers. Innocents that we were, we regarded this method of moving food around the district as state of the art. Our eccentric headmaster, who was also the owner of the school, probably saved money by avoiding the use of external caterers.

Kitchens in wealthy medieval households enjoyed comforts that were not available to the peasant classes. Trestle tables and benches were plentiful, as were pots and culinary implements.  Cavernous inglenook fireplaces, constructed against an end stone wall, provided excellent cooking facilities. 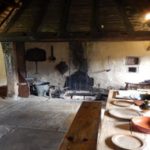 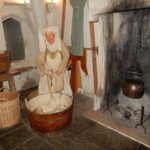 High ranking servants received payment, but lesser serfs worked for nothing more than their keep. Scullions, at the bottom of the pecking order, were expected to, turn spits, clean fish, scour pots, and fetch and carry for the senior servants all hours of the day and night. A huge ladle was the cook’s trademark. The implement, used in the cooking process and for serving food, also made a handy weapon.  Many a poor serf was on the receiving of a hefty clout for committing a minor misdemeanour.

Feast days for the gentry often saw a whole pig, impaled on a spit, slow roasted above the hot embers. Chickens, venison, and fish were consumed in large quantities, necesitating vast amounts of timber to be hauled into the manor kitchen. Scullions, taking turns to wind the spit handle, became mottled and scorched from the fierce heat. If the embers showed signs of cooling, the lads were expected to resusitate it with the aid of bellows. Medieval life was hard and unfogiving. 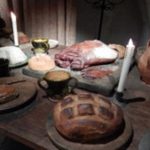 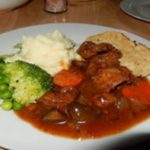 As I tucked into my plate of hot stew and damper on that lovely tropical evening, I gave thanks for being born in the 20th century.

To round off this month’s blog, I have added a short passage from Book One, Oric and the Alchemist’s Key. Apothecary Ichtheus is enjoyng supper with his friend, Nathaniel, the shepherd.  I hope you enjoy reading it as much as I loved writing it.

Excerpt from Book One.  A Spooky Night Out

Ichtheus heated the pigeon stew and spooned generous portions onto three wooden platters. Each fat bird, surrounded by turnips and onions, dripped with delicious gravy. Conversation stilled until the bones were sucked clean. Belching gently, Ichtheus reached for the first bottle of nettle wine. A short time later he opened a second bottle. The imbibers stretched out before the fire, feeling lazy and mellow.

Nathaniel produced a flagon of mead, and mellowness swiftly degenerated into intoxication. “I say Ichtheus!” Nathaniel slurred his words, “Did you hear about that old crone?”

“The one they branded a witch.” Nathaniel paused for effect. “I heard that some half-wit locals dragged the poor old hag from her hovel and carried her to St Griswald’s Church. ‘Tis said they never gave her a chance to defend herself. ‘Tis said the fools built a pyre in the middle of the graveyard and burned her alive.” He shook his head blearily. “What a terrible way to die.”

Lastly before I close, I’m so excited, Oric and the Lockton Castle Mystery, book 2 in The Oric Trilogy, was nominated for the 2020 Readers Choice Awards contest by TCK Publishing!

I would be tickled pink if anyone would like to vote for it. You can find it in the Historical section #14 www.tckpublishing.com/2020-readers-choice-voting-page

Have a great month, and be sure to visit my April blog for more chat about the lives and times of medieval people.