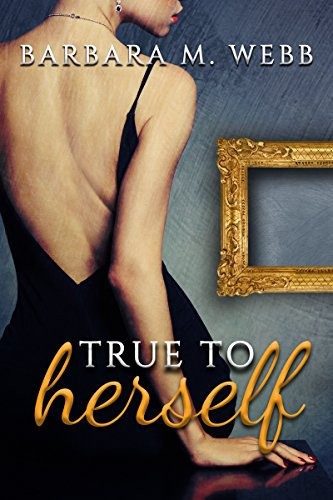 True to Herself
by
Barbara Webb

What if your husband was unfaithful to you? Could this be a gift in disguise?

After facing anger for her unfaithful husband Guido, thirty-six year old Australian, Moira Capaldi resigns from an established career, vacates her marital Sydney apartment overlooking the Pacific Ocean and arrives in West Gidding, a small village outside London. She is passionate about improving her painting skills and her knowledge of art but is it the sole reason for this cathartic move, a secret one at that?

The year is 1985. The first British mobile phone call has been made, and the first debate in the House of Lords has been televised. It’s a time of hope for the UK – fresh beginnings for Moira. She ponders,
“When you’re alone, miles from all you know and love, that’s when you find out who you are.”
And so begins a journey of self-discovery for Moira, particularly when establishing new relationships, both male and female.

Romance seeks her out when she meets Mike, a lawyer she is attracted to, enough to go away on holiday with; but there’s also Tony who makes her laugh a lot. Can she choose between them?

And then there is the ghost mystery surrounding the fifteenth century cottage where she rents a room, a mystery which seems to connect her with three other women living locally.

Then Australia lures her back for a short visit with dramatically-devastating consequences.

Does Moira need to address the demons of her past before she can embrace any happiness in the present?

My Review for True to Herself by Barbara M Webb

True to Herself took me by surprise, for it is completely different from Ms Webb’s other books. That said, this story is every bit as enthralling.

The main protagonist, thirty-eight-year-old Moira Capaldi does much soul-searching after finding her husband in bed with another woman.  Deciding she no longer loves him, and who would blame her because he is a total ratbag, Moira leaves her safe teaching job in Australia to pursue an art career in England. Sound simple? Not so. The transition from married to single life proves a bumpy ride for Moira.

I’m not going to add a spoiler and say whether or not she finds a new love – you must read the book for yourself to find out.   She does, however, encounter a ghost in a small cottage she rents.

The author’s descriptions of location, and the addition of many interesting well-rounded characters, help to make ‘True to Herself’ a fascinating read. If I have any complaints it is the rather abrupt ending. It left me wanting more, and I’m wondering if there is going to be a sequel.